Aman Patel grew up with plans to become a doctor, like his dad. Now, as a biostatistician at Mount Sinai, his title may not be what he initially expected, but he’s achieved a newfound balance between his varied interests. 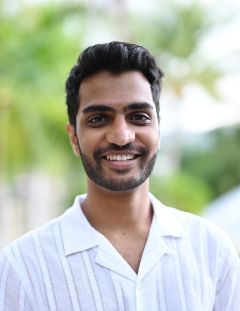 Aman began his undergraduate degree on a pre-med track at Indiana University, but computer science unexpectedly clicked for him, and he knew he wanted to pursue it further. While obtaining his BS in computer science, he maintained an interest in healthcare, but developed programming skills and did research to further his understanding of data analysis. In an effort to merge the two fields, he found the biostatistics and data science track of the MS in Healthcare Policy and Research program at Weill Cornell Medicine (WCM), now known as the MS in Biostatistics and Data Science program.

Aman started the program in 2021, moving from rural Indiana to New York City to do so. Though he values the experience of his core classes, he describes his Natural Language Processing & Health elective—taught by Dr. Yifan Peng—as most impactful. Prior to taking the elective, he hadn’t experienced the use of NLP in daily life, and appreciated learning its many applications in different programs. The course led to a final project wherein Aman combined machine learning and NLP techniques for data augmentation—a method he hadn’t seen much application of in the biomedical space. With Dr. Peng’s help, he submitted the project and was accepted at the International Society for Computational Biology conference in 2022.

“I wasn’t expecting much, and when I found out I was accepted, I was in shock,” he said. Though the conference was virtual, Aman was excited for the opportunity to present and learn from other projects.

“This program was perfect for having the best of both worlds. Coming into it, I had a lot of experience in math and programming, but not with the healthcare-focus in statistics. The program was great as a supplement to my undergraduate experience, and in preparing me for a data science or data analytics role,” he said.

Aman further reflects positively on his capstone project, wherein he and fellow researchers took patients’ baseline psychological characteristics and used those to predict how effective certain psychotherapeutic treatments would be. He completed the project under the guidance of Dr. Banerjee, who he describes as supportive and adaptive to the changing timeline of the project. He hopes that all his future projects are run as smoothly as this one was.

“It was great to be able to put out a group project that was collaborative,” he said. Aman emphasizes the toll that the pandemic took on the social aspect of his academic experience, and the contrast in interaction that this project provided. “I didn’t previously have that opportunity, and I think it’s really helpful to get used to having advisors and working with different perspectives.”

As a student, Aman also joined the data science club; an environment where professionals shared their experiences with data science, various workshops were held, and students could discuss topics relevant to them. Having recently graduated, Aman sees himself in a data science role long-term, and while he currently enjoys being in healthcare, he’d like to one day apply his data science skill set to finance or sports analytics.

At Mount Sinai, he’s part of a research group led by Dr. Nicholas DeFelice, who works primarily with the transmission of respiratory viruses and uses environmental and ecological data to predict how transmission will occur in different scenarios. Aman assists with plots and imaging, and will later start modeling the disease mechanics.

“My main goal is to have tangible, real-world impact with my work,” he said. “That was my goal with studying medicine in the first place—that ability to help whoever I can. Healthcare is where I believe I can have a strong impact on others.”